Tyson’s Recovery: From Muzzles to Manners

Tyson’s Recovery: From Muzzles to Manners

We asked Tyson’s owner Ted Jappert to share his pet’s story of recovery: 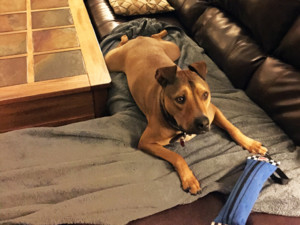 I received Tyson from a friend that had to move and could not keep him anymore.  Tyson was complicated.  He wasn’t very social with people, particularly men.  He had nowhere else to go, so I decided to take him in temporarily.  I really grew pretty attached to him and decided to keep him.
For vet visits, I had to call ahead to have a room ready for us, because I knew once we got there it was going to be tense.  We tried to do nail trims, but there was no way.  I would regularly have to muzzle him for any kind of introduction to people.  He just did not trust people in general.

Things were pretty tense for the first year, and one day I had him out on a walk.  He liked walks, but wasn’t very good at walking and I wasn’t very good at dealing with how he reacted to things.  A little dog charged us and I figured for sure he would kill it to protect us.  Fortunately, all he did was grab the dog with his front paws and throw it.  No one got hurt, but I knew it was a matter of time.  We could 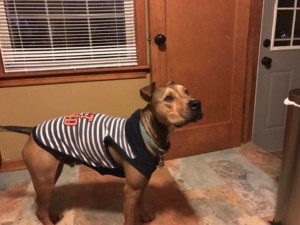 I called a Professional Dog Trainer, Bridget Davies, at the recommendation of a coworker.  Bridget agreed to meet us and see what she could do.  She came to my house and  worked with us regularly.  She came about every two weeks and always had homework for us to do.  It was a real chore, but we clearly defined beginning goals, and we modified those goals as time went on.

Eventually, Tyson was able to meet other dogs.  After about a year, we considered Tyson graduated and put Bridget on “as needed”.  As training progressed and he experienced recovery, Tyson went from being “that dog” to being “That Dog!”  He came so far that introductions became nothing at all and where they used to take 45 minutes would take about 10 seconds.

Whereas I used to dread taking him to the vet, I could now count on him having a good experience there.  To this day, we stop by just to see people! 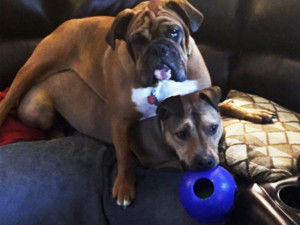 One morning Tyson was acting really sick, and Dr. Mike worked him into the schedule to see him.  In the past, Tyson has seen Dr. Kelly, but as she was unavailable,  and we needed to take whatever opening we could get.  Dr. Mike worked with Tyson, and he seemed to be doing a little better.  However, later that day, Tyson started to worsen again due to a bowel obstruction.  He went from just being sick to not even being able to pick up his feet.

Dr. Mike got Tyson right back in later that same day and ended up shutting down his entire practice to do emergency surgery to save his life.  The entire JVC team really pulled out all the stops that day to deal with both of us (I was probably more of a problem than he was).

The surgery was successful and after a night at the emergency vet, the next morning we stopped in for a quick visit with Dr. Kelly.  She took great care of us during Tyson’s recovery–the follow up care was lights out.

Sadly, the saga doesn’t stop there because about 6 months later, we went through the same exact thing.  Same exact symptoms, same sequence of events.  Fortunately, we already had a pretty good idea of what was going on right from the start.  But once again, the entire JVC crew pulled out all the stops and once again shut down the entire clinic for emergency surgery. 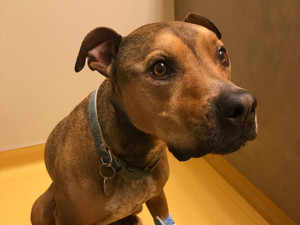 Today Tyson is doing well and is as happy as I’ve ever seen him.  His training has enabled him to be more successful with other people and dogs.  That combined with the fear-free techniques the JVC staff uses have made all the difference in the world.  Without Dr. Mike and his staff, Tyson would have lost his life for sure.   Their efforts are greatly appreciated, and they now have faithful customers (and friends) for life. 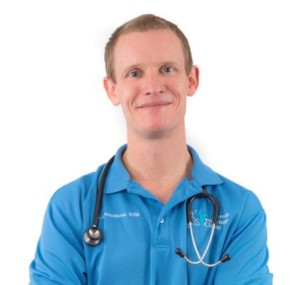 “Tyson is a great example of what a dedicated owner who provides good training, combined with our Fear Free approach, can accomplish.”

Tyson was on the verge of being kicked out of our practice. He was very unpredictable and likely to bite with little warning. The previous owner had very little control of him and was unable to even put a muzzle on him. Thankfully, Tyson made his way into Ted’s home and things started to change. Between all the work Ted did and lots and lots of treats and patience on the part of our team, vet visits were no longer as scary for all involved. Without all the rehabilitation efforts, it likely would not have been feasible for us to perform all the necessary treatment in Tyson’s two big incidents. On both occasions we were able to do everything necessary to diagnose him and set his treatment plans in motion. Two surgeries later, I get kisses from Tyson when I come in the exam room! He is truly a success story in many ways.

Have a Happy Tail of your own?  Email Us

About the Author: Jenny Neuville